If you wish you can view this enclave through Google Earth . Antequera Town Hall Tourism Department. 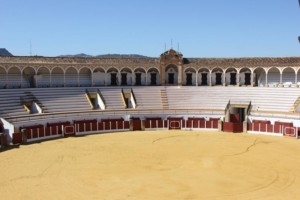 The Antequera bullring was inaugurated on the 20th of August 1848. As it was constructed in a hurry, the higher rows of seats were made in wood and they continued like that until 1980, when the Town Hall purchased the bullring. In 1983, it was decided to proceed to make a whole transformation, both inside and outside. The façade building works started in 1984 with the construction of a new main door for the shadow part following the style of the Antequera master builders of the last quarter of the 18th century. The rest of the façade was based on this monumental door by combining the distribution of bricks and whitewash lengths. During the following years, it was carried out the restoration of the interior. It was reconstructed the rows of seats, the arena diameter reduced and all the covers replaced by means of a loggia arcade consisting of Tuscan columns made of white limestone and semicircular arches. This arcade and the façade wall support a 2-side roof with old Arab tiles. Once all the building works were finished, the present aspect of the Antequera Bullring has nothing to do with how it looked in 1848. It is now one of the most beautiful bullrings erected in the whole national territory.