Places > What to do > Heritage > Civil Architecture > Palacio Consistorial
Previous Next 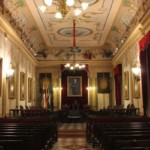 Antequera Town Hall Tourism Department. Until the Law of Disentailment, the present Town Hall or Municipal Palace was a convent owned by the Third Franciscans who were also the owners of the Los Remedios Church. Even if the façade has been redesigned in modern times, the interior still keep important pieces of the old monastic complex, such as the cloister courtyard and the sumptuous main stairwell. The cloister was already erected in 1679. It is a square cloister courtyard 25 meters wide, made of brick except for the Tuscan columns which are made of red limestone from El Torcal. The arches located in the first section have Mannerist-style moldings, with corbels on the keystones and fractioned triangles standing out on the spandrels.  In the higher section there are seven balconies in each front opened toward the exterior. They are provided with flat pilasters adorned with flanges and broken pediments.

In the middle of the courtyard there is a beautiful fountain of marble. The stairwell is one of the most monumental among those in Baroque style in Antequera. It has a rectangular floor with three flights and two landings. The banister, skirting board and the stairs are really palatial due to the richness of the materials (polished marbles in different colours) and to the beauty of the design. The space is covered with a semicircular vault supported by plasterwork pendentives. Two sea shell-shaped quarter-sphere vaults complete the covering of the rectangular floor in both ends. In 1845, the whole conventual building was purchased to be used as the Municipal Palace. Then, significant works were carried out in order to readapt the building. Those works mainly affected the façade and several internal rooms. From the later, it stands out the Session Hall, with a 19th century character and decorated in 1890 with temperas, as well as the King Hall. The present façade, started in 1953, was designed following a Neo-Baroque style based on local models