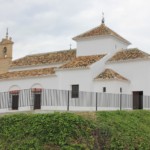 Antequera Town Hall Tourism Department. This temple offers a panoramic view of the whole town and of the Antequera lowland (La Vega) as it is located in one of the highest part of the town. It is in Renaissance style mixed with Mannerist elements and small Baroque details in the frameworks of some of the smaller chapels. The hermitage was erected by a devout follower of the Saint Vera Cruz and, with the passage of the time, it became the place where the Antequera fraternities and, in particular, the Brotherhood of the Vera Cruz and Sangre de Cristo (Blood of Christ) made their Station of Penitance until the 19th century. Thereafter, the transformation and the little use undergone by the temple, and its subsequent neglect, led the owners to cede it to the Town Hall late in the 70s. Thus, the hermitage was getting damaged little by little until it was almost destroyed at the late of the 80s. In 1977, the temple was again erected on the basis of its original design and new sections were added.