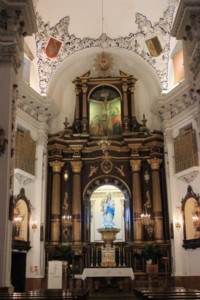 Antequera Town Hall Tourism Department. This building was owned by the Order of Friar Minor of Saint Francis of Paola, who abandoned it after the Disentailment Law. Currently, it is occupied by the Order of the Tertiary Nuns founded by the Mother Carmen of the Child Jesus, born in Antequera. The present temple was erected between 1712 and 1718. The design of the church’s floor plan and elevation is really interesting. The façade is made of ashlar masonry and it has three sections separated by enormous compound pilasters crowned with an intense chiaroscuro entablature. In the mid-18th century, a brick belfry was placed on the top of the attic. The most characteristic element of this façade is its projecting central balcony, as well as the lateral ones, which give to the convent an air of civil building. It is also quite curious the pendant hanging in the middle of the double arch which gives access to the church. The interior has a central plan model very elaborate. The nave is an octagon with unequal sides which form an elongated space where the High Chapel has a hexagonal floor plan. As the spatial structure is quite intricate, visitors might feel a little bit disconcerted. There is not such as profuse use of plasterworks as in other temples. However, the moldings of the entablature covering the whole temple are impeccable.

The niche, with a hexagonal floor plan, keeps the original plasterworks of the early 18th century. Most of the reredos located in the nave are golden joints of the first half 18th century. With regards to the paintings, it stands out a picture of theAlegoría de la Eucaristía (Allegory of Eucharist) in the Epistle’s lateral chapel depicting a golden ostensoria surrounded by heads of angels, plus several architectonic  elements, flowers, spikes and a medallion; in its lower part it appears aÚltima Cena (Last Supper), probably a work by the Seville school.