Places > What to do > Heritage > Points of Interest > Antequera, Centre of Andalucía: Kilometre zero
Previous Next

Antequera is proud to be the center of Andalusia. The landmark in the Plaza de San Sebastián refers to this fact: during thousands of years different civilizations have passed through the old city. The column of red Torcal marble has an inscription about Antequera’s central location throughout history, as demonstrated by the ‘Via Domiciana Augusta’, that passed trough the city and which made ‘Anticaria’ (the name of Antequera in Roman times) the main crossroads of all the provinces of Hispania. The landmark has been erected in the Plaza de San Sebastián, the emblematic center of the city, formed by the Collegiate Church of San Sebastián, a Renaissance fountain, a Mudéjar tower crowned by a big angel called the Angelote, and the Nazareno Arch. The landmark symbolizes the geographical center of Andalusia, through which all the Andalusian roads pass and it is a monument of tourist interest. 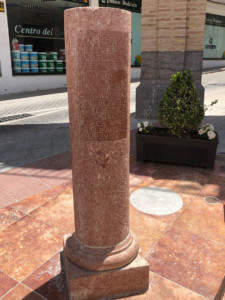