Good Friday- Fraternities of “Abajo”, “Arriba” and Soledad (Down, Up and the Solitude)

The Good Friday is one of the most important days in our Holy Week. Perhaps because, since old times, there has always been a kind of “rivalry” between the two Fraternities that go in procession during the evening: those popularly known as the “Down” and the “Up”, because one of the temple-church is located in a “more steeped” slope that the other.

The Fraternity of Abajo (Down), also called of La Paz (The Peace), leaves from the Santo Domingo basilica, with the Niño Perdido (Lost Child), an unusual carving within the Holy Week’s iconography. It is a Jesus Child with a cross in one of His hands. The Dulce Nombre de Jesús Nazareno ((Sweet Name of Penitent Jesus): an image intended to be dressed, dated of the late 16th century and which depicts a Christ carrying a big cross made of finely worked silver. The Cristo de la Buena Muerte (Christ of the Good Death): a Crucified with quite a robust form. And, finally, Nuestra Señora de la Paz (Our Lady of the Peace), a really beautiful sculpture due to Her stylized facial features. This Virgin is taken in procession under a sumptuous throne- canopy with twelve long sticks grouped in the corners and on a magnificent pedestal of the 17th century.

A little bit later, it leaves from the church Santa María de Jesús located in one of the highest squares of the town –the Portichuelo-, the Fraternity of Arriba (Up), also called of the Socorro (Mercy). Three are the floats of this Fraternity: the Cruz de Jerusalen (Cross of Jerusalem); The Jesús Nazareno con la Cruz a Cuestas (Penitent Jesus Bearing the Cross) which is accompanied by the figures of Simon Cirineo and that of the Verónica; and Nuestra Señora del Socorro (Our Lady of Mercy), whose canopy throne is one of the largest of the Holy Week in Antequera and where stands out the pyramidal shaped pedestal of the 18th century, the cover and the curtains embroidered in gold and embossed silver. These two Fraternities go together in procession through the center of the town, respectively accompanied by the Navy and the military force Los Regulares.

The peak moment of the procession is when the floats arrive to Plaza de San Sebastian and are put face to face to pay tribute to each other, in particular those of the Virgins. From there, they start to go up with a brisk pace by the steeped slopes which go up to their temples. This is the tradition known as “correr la Vega” (running the lowland). Already in the middle of the early morning, the Fraternity of the La Soledad (Solitude) starts its procession from the monumental church of iglesia del Carmen . This Fraternity has got the oldest image of a Virgin of Sorrow in our Holy Week. It is the group of sculptures known as the Quinta Angustia (the Fifth Anguish), whose origin date back to the first quarter of the 16th century and which depicts the iconographic theme of the Piety. This valuable image –by Miguel Márquez García- goes in procession through the Antequera’s streets together with the floats of the Cruz Guía (Guide Cross); that of the Santo Entierro de Cristo (Saint Funeral of Christ), where it must be emphasized the figure of a lying Christ inside a beautiful Rococo case; and finally, Nuestra Señora de la Soledad (Our Lady of Solitude), who wears a silver crown of much artistic beauty. 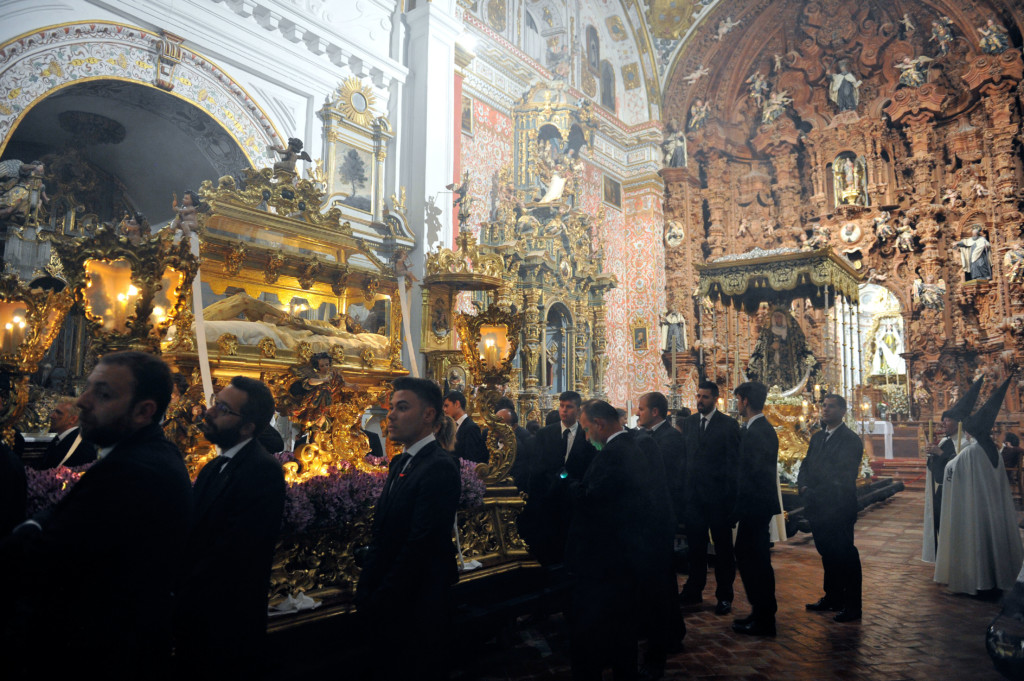 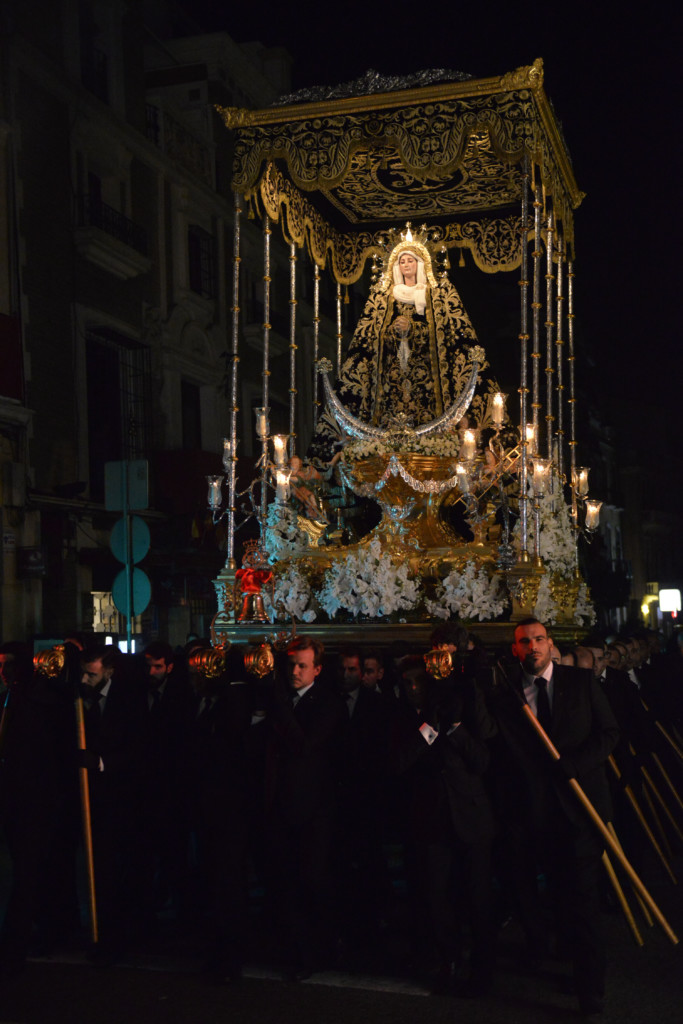