Lord of Health and Waters 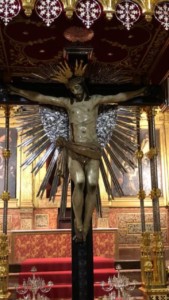 Every year, the last Saturday of April starts one of the most deeply-rooted traditions in Antequera: the worship to the Santísimo Cristo de la Salud y de las Aguas (Sanctity Christ of Health and Waters), Patron Saint of the town. This day, the Lord is moved from His usual chapel, located in one of the lateral naves of the Parish Church  San Juan Bautista to the High Altar of the same temple, in what it has been named the “Lord descent”.

Since that day until the middle of May, the San Juan church –located in the neighborhood of the same name- becomes the center of the pilgrimage for many of the Antequera people who worship the image of this crucified Christ. Between the 1st and 18th of May, two novenas are held in honor of the Lord, following a text who has not changed for almost two centuries ago. During those days, different professional brotherhoods and associations of the town share out the organization of the acts. In fact, the cross of the Lord was donated by the Brotherhood of the Wool, so important in Antequera in 1700.

The following Ssturday to the 18th of May, the Lord, under a Neo-Gothic throne of late 19th century, is taken out in procession through the streets of the town. That day, thousands of pilgrims from the borough and other towns come to Antequera to continue with the tradition of going behind the throne carrying candles. 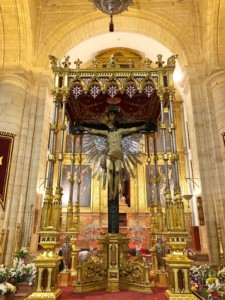 In 2018, the silversmith born in Antequera, Pepe Cantos, made the line of embossed and chiselled clouds finished with clusters of sunbeams around the image of our Patron Saint.