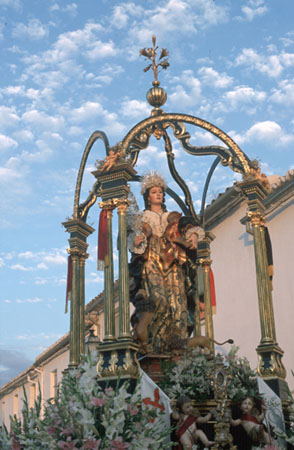 On the previous Saturday to the 16th of September, it is held the procession in honor of Saint Eufemia with the traditional bonfires. However, it is the following day when it is commemorated with a Solemn Mass this Saint’s day and the conquest of the town by the Christian troops in 1410. The Municipal Council takes part in this Mass, which is held in the church of Santa Eufemia, by lowering the banner before the holder of this temple.

In order to find out the origin of this tradition, we must go back to the conquest of the town. Once Rodrigo de Narvaez was appointed as Mayor of the town, which was awarded with the coat of arms, Antequera still needed to be put under divine protection by finding a Patron who acted as intercessor before God. The custom of the time was to appoint as protector of the town the Saint whose feast coincides with the day of the conquest. Following this criteria, on the 16th of September, Saint Cornelio, Saint Cipriano and Saint Eufemia are included in the Roman Missal and, consequently, it was decided to draw lots among the three saints. For three consecutive times, the name of Saint Eufemia, Chalcedon martyr, was elected and, therefore, chosen as the Patron of Antequera.