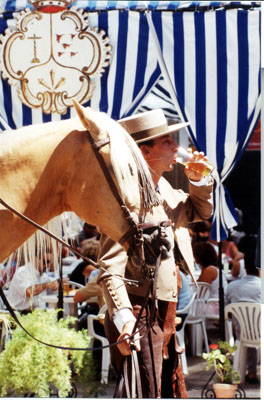 The  Royal Fair in August, which was declared “Fair of National Tourist Interest”, is one of the oldest in Spain.  It dates back to 1748, when the King Fernando VI gave Antequera the privilege of celebrating this annual Fair.
Our Fair in August is getting more and more importance as many people come to visit us during these days. We should bear in mind that some of the days of our Fair coincide with those of the Malaga Fair; thus, it is a good opportunity for the visitors of the latter to come to Antequera.

The Fair’s programme is varied and comprehensive, as it tries to satisfy everybody’s liking. As it is usual in this kind of celebrations, some days prior to the fair one can already feel the festive mood  as people start to get ready by attending to important acts, such as the opening speech of Los Cabales‘s Bullfighting Brotherhood,  usually given by people related to the world of bullfights: stockbreeders, bullfighters, bullfighting critics, etc. A few days later, the Official Opening Speech of the Royal Fair is given by some distinguished personality of the town accompanied in this solemn act by the Municipal Authorities, the alderwoman of the fair, the media and by many citizens.  Another activity prior to the fair is the Pilgrimage of the Veronica Lord, which every year starts with a mass at the Bullring followed by a procession through several streets of the town and finishes at the Hermitage where  the image, so much venerated  by the Antequera’s people, rests the rest of the year.

The beginning of the Royal Fair is marked by switching on the official lighting.  Since that evening, the town lives its fair during a week, with many events addressed to all kinds of public. A  few years ago, as it happens in Malaga, the Fair was divided in two: the “Day Fair” and the “Evening Fair”. During the daylight, people go to the premises (casetas) located  in the urban center, which are prepared for this occasion by the associations and brotherhoods, and also to those casetas located at the fairground. During the evening, only the casetas of the fairground are opened. Last 2005, the fairground was moved to its current location: the Parque del Norte. 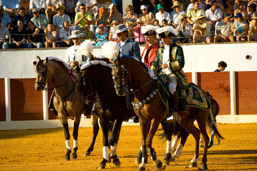 There, you will find the Municipal Caseta from the Town Hall, others Andalusian-style casetas plus  those devoted to youth, the funfair and the street stalls which attract the curiosity of those who go for a stroll to the fair space.  During the fair week, there are many shows to entertain the citizens: music, humor, bullfights, horse-drawn carriage exhibitions, activities for children, etc. The last evening, the fireworks put the icing on the cake to this varied and entertaining  Antequera Royal Fair in August.