If you wish, you can view this point through Google Earth. Antequera Town Hall Tourism Department. In the beautiful landscape of the La Vega (fertile lowland) in Antequera, halfway between our town and the neighboring village of Archidona, it rises the Peña de los Enamorados (Lovers’ Rock). It has received this name because the singular profile of the rock remains a human face looking at the sky with the head on the earth, as if it was a lying man.

The explanation for this peculiar silhouette outlining the town skyline comes from the homonym legend from which it takes the name. “A young man apparently born in a Christian Kingdom was captured in the Granada lands and taken as a slave to the house of a rich Moorish family. There, he and the house owner’s daughter fell in love. As both of them knew that it was a very difficult relationship due to their different religions, they kept the secret. However, one day they decided to run away; unluckily, the father of the young woman found it out and went after them with his army. After a long time running away, the lovers arrived to the Rock, where they decided to stop to have a rest or perhaps to seek refuge. Unfortunately, they were tracked down by the army. Amid all the confusion and in despair of not being able to achieve their escape, and above all, their love, they embraced each other and jumped from the summit of the Rock.

This Rock’s natural landscape covers 117 hectares of a great ecological interest which are visited by many people. 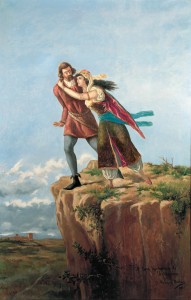