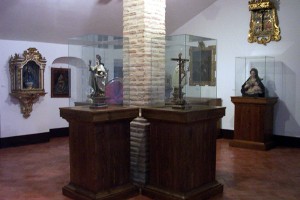 Antequera Town Hall Tourism Department. This Museum is located in the Convent of the Discalced Carmelites (1632). It was created in order to bring the visitors closer to the Carmel Order and to contribute to the cultural life in Antequera. Actually, as the Sisters of this Order –founded by Saint Therese de Jesus- explain, the museum was thought as an idea to try to evangelize from their cloister and, at the same time, give away the monastery’s artistic richness.

The historical heritage gathered during many years by this convent is very interesting. Moreover, it has not been reduced by the passage of the time as the Sisters always preferred to suffer hardship than selling out of necessity their artistic legacy. Part of that legacy is currently shown in four rooms located in the cloister area. To these rooms it has to be added another one: the very own convent’s church devoted to San José.  When going around the museum, the visitor will contemplate pieces of great artistic value. It stands out a bust of a Dolorosa (Lady of Sorrows), in the La Tribuna room, by the artist from Granada Pedro de Mena (1628-1688). In the La Soledad room it is the Virgin of Belem, one of the best sculptures of the museum and which has been attributed to Luisa Roldán, “La Roldana” (1652-1704?). The pictorial chapter is also noteworthy, with paintings from the 16th to the 18th centuries, by several painters, such as Antonio Mohedano de la Gutierra, Luca Giordano and the Mexican Antonio de Torres, among others.

There also are many glazed showcases and cases with images depicting the Niño Jesús (Child Jesus), such as the Niño Jesús Pastorcillo (Little Shepherd Child Jesus), attributed to Francisco Salcillo, from Murcia; several carvings of the Virgin and Saint Joseph and some silverwork pieces belonging to the convent, such as a filigree set made in Cordoba.

Convent-Museum of the Discalced Carmelites leaflet