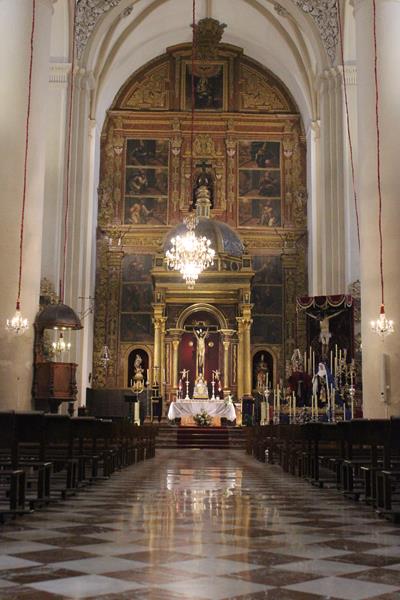 Antequera Town Hall Tourism Department. The original San Pedro church was built in 1522. Soon, the temple became too small and the building works were again started in 1574. However, due to the lack of means and to the ambitious nature of the project, the works continued for quite a long time.

We do not know anything about the original architect, although we do know that, between 1627 and 1636, the building works were directed by the architect of the Malaga Cathedral, Pedro Díaz de Palacios. This great temple must be included within the group of churches that, in Antequera, have been qualified as Renaissance Column Churches. Unlike the other two, Santa María and San Juan, this one is covered with a Gothic cross vault and not with Mudejar coffered ceilings. The San Pedro’s column hall is rich in space but poor in decoration. The naves have got six stretches, being the two first on the sides much lower than the rest. The inner supports are sectioned plan pillars and plain shaft columns very high, which respond to a model more Gothic than Renaissance. The front of the Gospel nave has got a quite simple cross vault decorated with Baroque-style plasterworks. The High Chapel’s face panel is occupied by a polychrome plasterwork altarpiece which might have been done in the first quarter of the18th century. It has got two sections and a cornice, where there are thirteen plaster framed paintings. The baldachin which appears placed somewhat arbitrarily on top of the mentioned altarpiece was from the Santa María’s High Chapel and it should have been moved around the late of the 18th century. Under it, there is a small reredos with Corinthian columns on which there is a semicircular arch denticle entablature. There are several works of art distributed around the church, almost all of them of the 18th century. At the foot of the Gospel nave there is a very interesting painting depicting the Virgin of Silencio (Silent). In the same nave, it is the chapel of Nuestra Señora del Consuelo (Our Lady of Consolation), which is decorated with a frame made of polychrome plasterworks. The Virgin of Consolation is an image of the 18th century intended to be dressed up. The front of the nave is occupied by a bulky altarpiece from the first half of the 18th century where there are several interesting sculptures, such as a Saint Antonio and a Saint Francisco Javier, of the 17th century. The central niche is occupied by a Rococo style Blessed Virgin (Inmaculate) of smaller size than the life-size. Next to the sacristy, already in the Epistle nave, there is a small reredos from the late of the 18th century, with an interesting Niño Jesús Pasionario (Passion Jesus Child) of smaller size than the life-size. In this very same face panel there is a painting from the Sevillian school which depicts a Dead Christ surrounded by young angels. The following reredos is that of the Virgen de los Afligidos (Virgin of those in Grief), made of golden wood and of very simple composition. From the architectural point of view, we must emphasize the chapel of the Animas (Souls), whose vault and arch mouthpiece are decorated with significant plasterworks. The main reredos is of the 18th century. In the central niche, between the figures of the Souls in fire, it stands out the figure of the crucified Cristo de la Misericordia (Christ of Mercy), by some of the Pedro de Mena’s disciples. The lateral altarpieces are of the 18th century and are occupied by the Virgin of the Antigua, an image of the 16th century, plus other minor sculptures. Before reaching the baptismal chapel, we find the significant sculpture of the crucified Cristo de las Penas (Christ of the Pity), of the 17th century, with an anatomy very elaborate and whose arms are almost vertical, following the Jansen proposal. In the baptismal chapel there is not much to be related but a painting of the Baptism of Christ of certain quality and the very own baptismal font made of red limestone from El Torcal dated from the 16th century. The sacristy has got rectangular plan and it is covered by a semicircular vault divided in three stretches by transversal arches. On the semicircular arches there are interesting grisaille paintings. As interesting pieces in this space, we must emphasize the central table and the aquamanile made of red limestone from El Torcal.