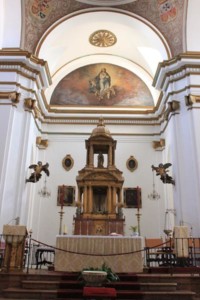 Antequera Town Hall Tourism Department. The present Collegiate Church of Saint Sebastian is the result of many additions and reforms during the years. The construction started in 1548 under the direction of the architect Diego de Vergara. 1692 was an important year for this temple, as many building works to change and improve it were carried out here in order to receive the Collegiate  that  was placed in the Santa María Church until then. The original style of the San Sebastian Collegiate Church is a not very well defined Renaissance. The most interesting element on the façade is the Renaissance front with three sections, where the lower one is framed by two pair of columns with fluted shafts and Corinth capitals with a little bit fantastic motifs. The sprandels of the access arch are decorated with clypeus enclosing busts depicting Santiago and Saint Felipe; the second section has got spindles and shallow sea shell-niches with sculptures of Saint Peter, Saint Pablo and Saint Sebastian. In the attic, we can see the Emperor Carlos V’s weapons inserted in the double head eagle. Quite interesting are the Hercules child and the representations of Twilight and Night which were put on the air, probably due to a stonemason’s mistake. An outstanding element is the tower, whose first masonry section was erected by Ignacio de Urzueta and it was afterwards continued by the Antequera master builder Andrés Burgueño. Later on, in 1722, Nicolas Mejías replaced the original capital by another one that was destroyed by a fire in 1926. Two years later, the current capital was made. The element who has remained since the beginning, despite the changes, is the so-called “Angelote”, a guardian angel crowning the tower and used as a weathervane. This land lighthouse has a very complex architectonic structure in the brick sections. The general decoration is based on adornment in clay punches, which were rightly and finely modeled, carved and distributed. The interior of San Sebastian has three naves divided by cross plan pillars with Ionic attached half-columns supporting semicircular arches. The naves were covered with wooden frameworks, although today they are hidden by plaster vaults. We do know nothing about the original aspect of the High Chapel, as it was completely destroyed by an explosion. In the middle of the nave, it is the choir with a very interesting stall carved in wood and which come from the convent of San Agustin, after having been confiscated by the Disentailment Law; there are also two Baroque organs. On the presbytery’s steps is the golden wooden tabernacle made for the High Chapel of Santa María and that was brought here when the Collegiate was moved to this temple. With regards to the reredos, it is worth noting that of Santa María de la Esperanza (Saint Mary of the Hope) which occupies the front of the Gospel nave, a work by Bernardo Simón de Pineda. Older than the mentioned reredos are the images of Saint Sebastian and Saint Mary of the Hope, a Gothic sculpture of the early 15th century, although the quilting and the clothes were renewed late o 17th century. In the front of the Epistle nave it is the reredos of the Renaissance image Virgen de la Antigua that came from the Collegiate Church of Santa María and which has a very elegant composition and perfect modeling. In the Gospel nave, next to the sacristy door, it is the tomb of Rodrigo de Narváez, the first Mayor of the town. In the Epistle nave, it stands out a Virgen de los Dolores (Virgin of Sorrows) intended to be dressed of late 18th century, and probably made by Miguel Márquez García. At the entry of the choir’s wall, there is an ostentatious Neo-Gothic reredos of late 19th century, whose niches are occupied by three Andres de Carvajal’ s works: in the middle, theCristo del Mayor Dolor (Christ of the Great Sorrow), the artist’s masterpiece, which depicts Jesus after the flagellation, knelt and picking up His tunic. Great part of the old and rich treasure of the Collegiate Church of Santa María was moved to this church and it is currently exhibited in the Museum of the Antequera Town.