Places > What to do > Heritage > Religious Architecture > Convento Trinidad
Previous Next 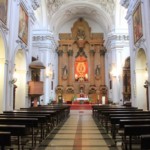 Antequera Town Hall Tourism Department. The religious order of the Barefoot Trinitarians founded this convent in Antequera on the second of August 1637. The present temple was designed by the architect of the same order, Fray Pedro del Espíritu Santo, and it was erected between 1672 and 1683.  It follows a church model based on the Encarnación Church, in Madrid, by Juan Gómez de Mora. The façade is a rectangle framed by two plain pilasters and crowned by a triangular shaped pediment. The central panel consists of three horizontal sections and three vertical sections. On both sides of the façade’s main section there are two wide flying buttresses. The belfry, located on the left side, is made of brick and it has got three niches. It might be of later construction. The inside of the church has a  spacious  Latin cross floor, with a vault in the transept and interconnecting lateral chapels forming naves. At the foot, it is the choir. In 1935, as the result of a fire, the High Altarpiece was completely destroyed, as well as the images which occupied the smaller niches and the main niche. Thus, the building lost its character, as the current altarpiece is not of much interest. The lateral naves were not affected by the fire. In the Gospel nave, with small vaults of the 18th century, it stands out a reredos located at the foot of the temple which is dedicated to the Virgin of the Pietá, a Dolorosa  (Sorrow) image of the 18th century intended to be dressed up, and which has suffered many restorations. The Epistle nave is covered with semispherical vaults. The first reredos to be found next to the tranpset is in Rococo style and dedicated to the Blessed Juan Bautista de la Concepción: an image of smaller size than the life-size made in 1818 by Miguel Márquez García. The following chapel is decorated with a Rococo- style reredos  being  the niche occupied by the image of Saint Miguel de los Santos, a work by Andrés of Carvajal. Next, we find the Saint José’s chapel with a quite poor sculpture. The main architectural piece is the sacristy, by the architect Cristobal García. It has a rectangular floor with a vault of a very complicated structure, as it is divided into several stretches by transverse tri-foliated arches. The added decoration becomes more significant, above all in the arches supporting trimmed sheets, whose uneven profile and the ornamentation with laces and balls remind us a real oriental inspiration, the same that several critics attribute to the Agustin church in this town.