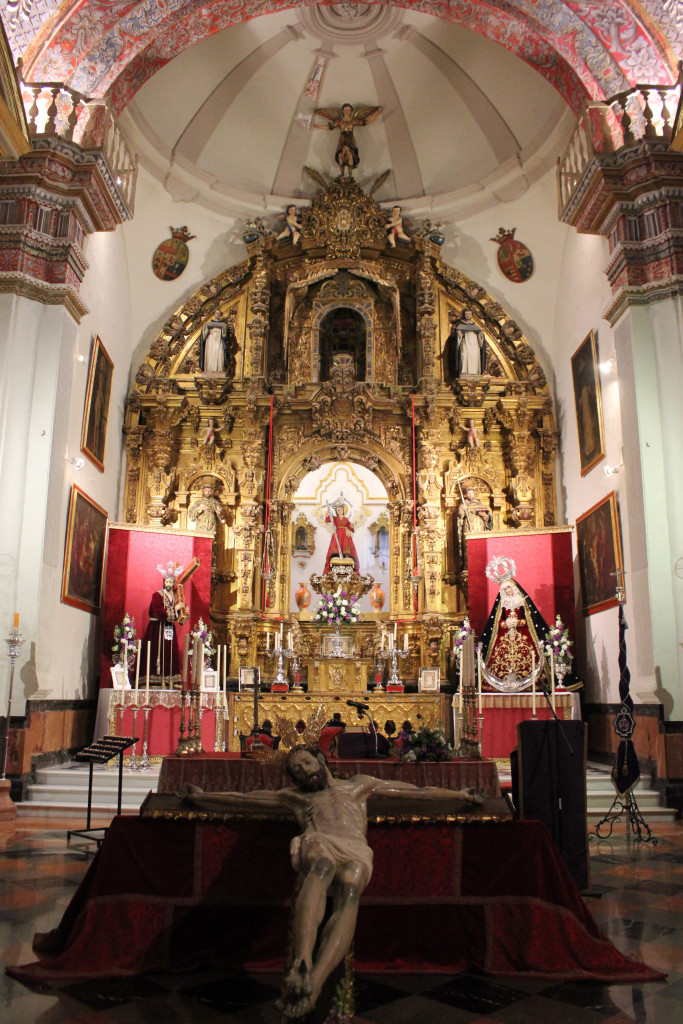 Antequera Town Hall Tourism Department. The establishment of the Dominic Order in Antequera is dated in 1586, although they were temporarily housed in the old house of the Fraternity of the Foundling Children of Our Lady of Conception. The building works of the present church started in the first quarter of the 17th century. From that time, we still keep the main front, the Mudejar framework in the central nave and the lower-choir coffered ceiling. The exterior is quite simple with the padding pilasters in the Mannerist front, as well as the arch voissoir. The second section is formed by a niche very beautifully adorned with the image in stone of the Titular image of the temple, the Conception. On both sides, there are slabs with the coats of arms of the Dominic Order. Until late in the 19th century, the façade  was crowned with a false mixtilinear gable end centered by a coat of arms. In order to give a direct access to the Epistle nave, the Fraternity of Rosary placed a small front in marble from Granada, dated in the last quarter of the 18th century. The front of the Dulce Nombre de Jesús (Sweet Name of Jesus) chapel, laid out on a right angle to the main façade and probably constructed around 1720, was made with the same idea.

This chapel is currently closed to the public as it is in ruins. The interior of the temple is the result of many changes and additions carried out in the 19th century. The Mudejar framework covering the central nave is a quite singular element, as it shows a bright and colorful polychrome in white, red, blue and gold. The High Chapel covered with a half-barrel vault is shaped as a very well-defined space, being enlarged towards the presbytery, which is covered by a semi-dome. All of that was decorated with tempera in the 19th century.The High Altarpice, of the 18th century, is a golden assembly where the estípite (truncated pilaster) stands out as support and decorative element. The lateral interestípites are enriched by the images of Saint Francis and Saint Dominic, attributed to the sculptor Andrés de Carvajal. Also in this same chapel there are two neoclassical enormous reredos of the 19th century. On the Gospel side, it is the charming statue of the Niño Jesús Perdido (Missing Child Jesus) of smaller size than the life-size. In front of this reredos, there is another identical one presided by the old image of Jesús Nazareno (Jesus Penitent), which is the Titular image of the Pontificate and The Royal Archconfraternity of Sweet Name of Jesus and Our Lady of Peace. The sculpture of the Penitent, carved in 1581, is a work by the artist Diego de Vega. From the main fleuron placed on the keystone of this High Chapel hangs a monumental lantern in tinplate and silver. The Epistle nave, lower than the central one, has four stretches covered with groin vault.In the first stretch from the front, there is a reredos of the 18th century whose central niche is occupied by the image intended to be dressed of Saint Dominic; on lateral shelves, there are good sculptures of Saint Rosa de Lima and Saint Thomas Aquino. The following chapel is not interesting, except for the niche with the image intended to be dressed of the Virgen de la Salud (Virgin of Health). In the next chapel, it is the image of Our Lady of Rosary, which had many devoted-followers in Antequera during 17th and 19th century. The pillars of the arch to access to the central nave’s chapel are covered in wood with a profuse use of carving adornments, small mirrors and interesting reliefs of Saint Joseph and Saint Raphael made by Andrés de Carvajal. The rich artistic heritage of this church is mainly kept at the Museum of the Antequera Town.The reredos is just a great golden frame due to the long entrance of the niche. The sacrarium’s door, made in embossed and engraved silver, is probably a work by José Ruiz. It depicts the apotheosis of Saint Thomas Aquino and it is considered as one of the most beautiful pieces of the Baroque precious metal work in Antequera. The sumptuous nice, built before 1717, was renewed in the late quarter of the 18th century by adding an agate skirting board with Marian symbols made in white stone. We also must emphasize two frames with mirrors which were donated in 1753. The sculpture of the Virgin of Rosary, made by Juan Vázquez de Vega in 1587, is on a golden wooden base. With regards to the paintings,  and apart from the walls and vaults decoration made in the 19th century and very much retouched afterwards, it stands out the picture of La Epidemia  (The Epidemy), a monumental votive offering dedicated to the Virgin of Rosary which shows the apocalyptic aspect of the town during the bubonic plague in 1679. Finally, among the Fraternity of the Sweet Name of Jesus’s processional belongings, we must point out the canopy of the Virgin of Peace, the pedestal made in 1682 by Antonio Del Castillo and gilded by Manuel de Borja, the Penitent’s silver cross made in the late quarter of the 17th century and the Sweet Name’s processional pedestal which is covered with golden silver adornments.