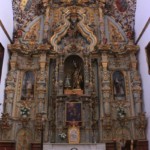 Antequera Town Hall Tourism Department. The Barefoot Carmelites of Santa Teresa founded a house and a convent in 1632, in Antequera. However, the present church was erected between 1707 and 1734. From the exterior, it stands out the wonderful Baroque façade, attributed to Tomás de Melgarejo. This façade follows the Carmelite design, although it surprises the iconographic paganism out of line with the nature and rules of the Order. The façade design reminds that of the Castilian’s: rectangular composition crowned by a triangular shaped pediment  whose main section it is the proper façade divided in two sections. It is made of brick magnificently cut and carved, with numerous fired clay applications where it is pictured a messy Greco-Roman decorative program consisting of mermaids, newts, pegasus and figureheads. The church has a Latin cross floor plan, with just only one nave where the transept arms are quite short.The High Altarpiece, divided into three vertical sections and ended in a semicircular arch, makes a profuse use of the estípite (inverted pyramid shaped pilaster) as the linchpin, like in the design of saint Carmelites to be seen in the El Carmen Church. The rest of the reredos  decorating the church probably are from the same period. The sculptures of Saint Teresa Doctora de la Iglesia (Doctor of the Church) and that of Saint José, from the early of the 18th century, are quite interesting. The latter was seriously damaged as a result of a spark and Andres de Carvajal had to replace its head. In a Rococo-style reredos we find a beautiful image of the Virgin del Tránsito (Passing). With regard to the sculptures, it must be also emphasized the angels holding lamps located in the presbytery, probably a work by Miguel Márquez. There are also interesting pictures, such as the magnificent painting, the Virgin with the Child being worshiped by Saint Miguel, Saint Gabriel, Saint Idefonso and Saint Catalina, by Pedro Atanasio Bocanegra; the Architectural Perspectives, as well as a beautiful Guadalupana by the Mexican Antonio de Torres. In the cloister, there also is an important collection of works of art, among which we can stand out a Virgin of Belem, an 18th century work, and a Saint José and at Immaculate by the Neapolitan sculptor Nicolás Fumo.