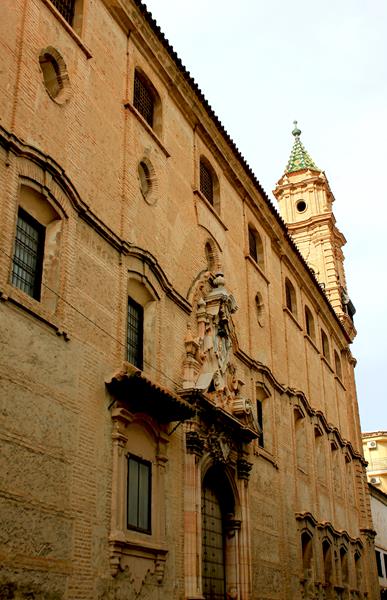 Antequera Town Hall Tourism Department. Few monuments in Antequera have aroused such an interest among those who study art than this convent church of the Augustinians de la Madre de Dios de Monteagudo (Mother of God). The church was erected between 1747 and 1761, according to the design of the master building Cristobal García and the convent was founded by the Augustinians Sisters in 1520. Already in 1547, the old building started to be built; however, as a result of a fire it had to be replaced by the present one.

It is noteworthy the enormous height of the exterior brick walls of the building, where two independent volumes stand out: the tower-dome in the High Chapel and the beautiful tower-belfry. The tower-dome is a tasteful work from the Baroque-Mudejar period in Antequera. From the tectonic point of view, they are assembled by large lengths based on vertical fascias, blind arches, niches, four-foliated portholes, mixtilinear moldings, .. The whole building is covered by an 8-side roof topped with a magnificent weathervane. The tower stands out due to its elegance, above all in the plinth of the bell main section, which becomes narrower with regards to the higher sections, what gives a false look of being unbalanced. The inside of the church is one of the most beautiful creations of the Baroque period in Antequera, from the architectural point of view. On the basis of a conventual church model very simple, it is achieved, thanks to a clever combination of straight and curve lines and concave surfaces, one of the most original spatial units of the whole Spanish architecture, despite the lack of ornamentation. The nave is divided in four stretches separated by Tuscan pilasters quite stylized which support the tri-foliated arches. What gives movement to the interior is the composition of concave piers and vaults set out in elaborate caps. The setting out of the high and low choir is also very interesting. The High Chapel vault is surely the most important and accomplished piece of the building. Four pendentives decorated with coat of arms, small angels and Rococo motives support a mixtilinear ring which gives way to triple vault with a very much elaborated structure. In The Neo-Gothic High Altarpiece is the opening of the niche: a small room that, from the outside, it looks as it was hanging.  This space is dominated by the image of the Virgin of Monteagudo, a sculpture full of grace and movement by José de Medina. Also the angels holding lamps, of the late quarter of the 18th century, are very beautiful. In the Gospel nave, at the foot of the Sister’s communion rail, there is a kind of reredos formed by several glass cases of different sizes where some interesting sculptures are kept: the group of Saint Ana, teacher of the Virgin, the Virgin of Valvanera, Saint Agustin, etc. After passing the stretch of the stormdoor, we find the Saint Agustin reredos, a work made by Jose Médina in 1748. It is noteworthy the Saint’s silver insignias which were made by the silversmith of Granada Vicente Ruiz Velazquez. The next reredos in the nave, next to the main arch, is a small Rococo machine much elaborated and made by the r18th century-Antequera workshop. In the first reredos, in the Epistle nave, next to the High Chapel, is a middle-size sculpture depicting Saint Jose and which probably is a Carvajal’s work. The following reredos is occupied by the image of the Cristo de Limpias, a modern crucified. Next to the choir, it is the reedos of the Virgin of the Rosario, a very beautiful 18th century image. The very own reredos, of the late of the 18th century, is surely a work by the Antequera sculptor Miguel Rodriguez Guerrero.