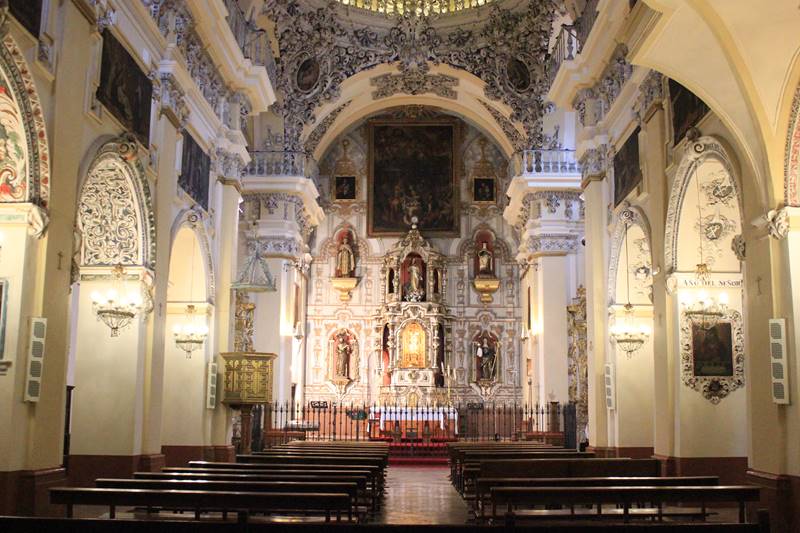 Antequera Town Hall Tourism Department. This convent belonged to the Discalced Carmelites until the 19th century, when it was occupied by the Sisters of the Order of Saint Clare, who still live there as cloistered nuns dedicated to homemade works, being the most well-known the mantecados (lard buns) and sweets in general. Already in 1628, the Portuguese Gonzalo Yañez was constructing this temple with a sober façade of stone and brick. It has a Latin cross floor plan with intercommunicating lateral chapels and a high vault in the transept. It stands out the very interesting rich decoration in Baroque blue plasterworks, one of the oldest among those in Antequera, and quite similar to the one we find in the San Juan de Dios Church. As architectonic additions, we have the niche where it is the sculpture of Jesús Caído en el Monte (Jesus Fallen at the Mountain) and that of the Virgen de los Dolores (Virgin of the Sorrows), a very beautiful image intended to be dressed and which belongs to the Venerable Fraternity of Servites. The High Chapel –closed in 1959 with a wooden fence inspired by the choir of the San Sebastian Church– is decorated in a very singular way. In its altarpiece there are, on shelves, four interesting images: a Saint Michael Archangel, with an Italian air; a Saint Clare; a Saint John of the Cross, in the Mena style; and finally, the very interesting sculpture of Saint Bruno, very similar to the one placed in the Sancta Santorum of the La Cartuja de Granada (Granada Charterhouse), a work by José de Mora. At the top of the High Chapel’s face panel there is an enormous painting depicting the Adoración de los Pastores (Shepherds Worship), of the mid-17th century, which has been attributed by some publications to Murillo, but that it actually is a work by Fray Domingo, a Discalced Brother from whom nothing is known. Among the rest of paintings in the church, there are some singular pictures due to their subject matter or to the decorative elements.