The Antequera town pays tribute to two of its most illustrious sons during the 20th century: the famous poet, José Antonio Muñoz Rojas, National Poetry Award in 1998 for this work “Objetos Pérdidos” (Lost Objects) and the multitalented José María Férnandez, painter and an erudite person, responsible for the most important researches about Historical and Artistic Heritage of the town.

It is a bronze sculpture complex by the artist Pedro Fernández Roales. It is installed in a bank of the central square Plaza de San Sebastian, which is symbolically considered as the “kilometre zero” of Andalucía.

This work of art, named by its author “Art without Time”, consists of two pieces of 125 kilos each which represent, life-sized, the figures of José Antonio Muñoz Rojas and José María Fernández seated in a bank as if they were talking. Muñoz Rojas is holding the book “Las Cosas del Campo” -his most famous work- in one of his hands; Mr. Férnandez is wearing his distinctive hat and glasses and he has been immortalized with the gesture of showing the poet a sketch of the Renaissance style fountain placed in the Plaza de San Sebastian.

It is worthy to mention that José María Fernández did not have descendants because his wife and children died before him; so, he bequeathed the town all his painterly legacy consisting of more than one thousand paints which are now exhibited in the Museum of the Antequera Town. 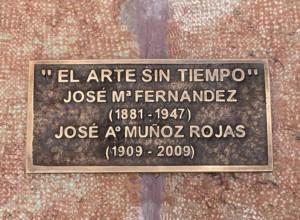