Antequera Town Hall Tourism Department. This building, which currently is the State School Romero Robledo, belonged to the Tejada family, who had the title of Baron of Sabasona. The construction goes back to the first half of the 18th century and it is one of the most original examples among the “shell-façade” houses so characteristic of the town. The façade of this mansion is in brick, except for the front where the white stone ashlars alternate with those in black. This is a Mannerist element, despite its construction period. It is also noteworthy the balcony ironworks on the main floor, which were renewed –except for that of the middle- in the 19th century, as a replacement of big grilles. The courtyard, a little bit set off to the left with regards to the street door axis, is one of the examples more well-finished in the whole Antequera Baroque courtyards. It has a square floor plan and there is a triple set of arches supported by Tuscan columns in each of the four fronts. The Tuscan columns alternate the white stone with the black one, something not very common in the civil architecture of Antequera. The arches and the main section, with projecting iron rail balconies, are in brick and decorated with several flower details made of clay. The most original element of the stairwell, covered with elliptical vault whose pendentives are decorated with plasterworks, are the paired columns supporting the landing arches. 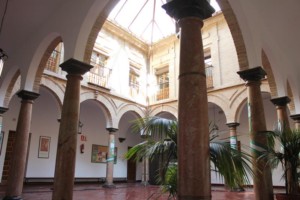